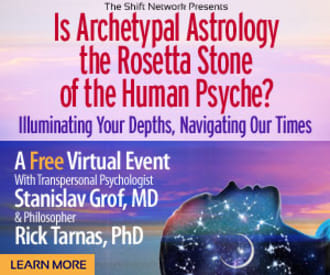 IS ARCHETYPAL ASTROLOGY THE ROSETTA STONE OF THE HUMAN PSYCHE ?

Astrology has long been scorned by academia...

Yet it’s been championed by some of history’s greatest intellectual pioneers, from Galileo and Kepler to Ptolemy and Plotinus.

Is it time to finally take astrology seriously and accept that it may point the way to a paradigm shift in how we view ourselves and the nature of the cosmos?

For the founder of transpersonal psychology, Stanislav Grof, and noted philosopher Rick Tarnas, the answer is an unabashed “yes.”

Though their experience and expertise differ — research into non-ordinary states of consciousness and immersion in the history of Western thought, respectively — they agree that archetypal astrology offers a unique and precise way to explore the depths of our psyche and the patterns that govern our culture.

When Grof studied people’s experiences in his groundbreaking research into non-ordinary states, the ONLY system that proved to have any predictive value was astrology. Similarly, when Tarnas delved into the history of Western civilization, he began to see that the larger patterns of our cultural evolution had predictable rhythms that closely correlated with planetary cycles and astrological archetypes.

Their work goes beyond “sun-sign” pop astrology to addressing the larger tectonic forces at the depths of the psyche, a subject that C.G. Jung also explored in depth.

Our psyche is set up in accord with the structure of the universe, and what happens in the macrocosm likewise happens in the infinitesimal and most subjective reaches of the psyche.
— C.G. Jung, Memories, Dreams, Reflections

So what’s really going on with archetypal astrology? Could academia be unwittingly preventing a major paradigm shift that points the way to an intelligent, ensouled universe, with astrology holding the master key?

In this exciting public event featuring two renowned intellects, you’ll discover more about how to harness the power of archetypal astrology to deeply understand yourself AND make meaning of our times.

A deeper understanding of astrology can help you navigate your times of greatest challenge and direct you to hidden resources. From identifying the most auspicious times for key decisions and actions to finding value and purpose in your darkest days, astrology can help shift your perception of the universe from random and capricious to intelligent and orderly, leaving you feeling blessed instead of stressed.

During this fascinating hour, Grof and Tarnas will share:

These two celebrated intellectuals will illuminate a view that makes sense to your mind, heart and soul, leading to a deeper understanding of life, new awareness of the underlying forces at work in our depths, and a healing recognition that we live in an “ensouled” universe.

When you join us for this exciting hour, you’ll also be the first to hear about a brand new online program anchored by these respected pioneers.

What People Are Saying About Stan and Rick...

I know of no work that so well incorporates the findings of Freud, Jung and Rank, adding fresh insights, which the methods of those psychotherapists could never have achieved. I do not doubt that many others working in this field would find Dr. Grof´s discoveries a basis for a whole new strategy of research.
— Joseph Campbell, Author of The Hero with a Thousand Faces

Grof marshals an impressive array of data and speculation in support of the timely demand that Western science acknowledge consciousness and its many non-ordinary states.
— Richard Alpert (Ram Dass), PhD, Psychologist, spiritual teacher and author of the spiritual classic, Be Here Now

Grof has had far and away more experience in psychedelic research than anyone else and has come up with the most comprehensive and helpful framework for interpreting the data in this bewildering area.
— Huston Smith, PhD, Author of The World’s Religions and Beyond the Postmodern Mind

Tarnas writes lucidly, brilliantly, passionately, unfolding the great drama of the evolution of the Western mind act by act, scene by scene in precise and scholarly detail.
— Anne Baring, Author of Resurgence

It’s hard to think of many books written in the past century that will still be read 200 years from now. [Rick Tarnas’] Cosmos and Psyche will top that short list. It is majestic, sweeping and profound. This will be a book for the ages. It will stand over time with the seminal expressions of the human spirit.
— William Van Dusen Wishard, Principal, World Trends Research and author of Between Two Ages: The 21st Century and the Crisis of Meaning

Stanislav Grof, MD is a clinical psychiatrist with over 50 years of experience in researching non-ordinary states of consciousness induced by psychedelic substances and by experiential psychotherapy. He’s one of the founders and chief theoreticians of transpersonal psychology, and the founding president of the International Transpersonal Association (ITA).

Stan currently teaches at the Department of Philosophy, Cosmology and Consciousness at the California Institute of Integral Studies (CIIS), and through Grof Transpersonal Training (GTT). He writes and gives lectures, seminars and workshops worldwide.

He is the author of the books, Psychology of the Future, LSD Psychotherapy, Beyond the Brain, The Cosmic Game, When the Impossible Happens, The Ultimate Journey, Modern Consciousness Research and the Understanding of Art, and co-author with Christina Grof of Holotropic Breathwork, Stormy Search for the Self, Spiritual Emergency, Beyond Death and over 150 scholarly articles.

Rick Tarnas, PhD is the founding director of the graduate program in Philosophy, Cosmology and Consciousness at the California Institute of Integral Studies in San Francisco. He teaches courses in archetypal studies, depth psychology, philosophy, cultural history and religious evolution. Formerly the director of programs and education at Esalen Institute in Big Sur, he is a graduate of Harvard University (AB, 1972) and Saybrook Institute (PhD, 1976).

He is the author of The Passion of the Western Mind, a history of the Western world view from the ancient Greek to the postmodern that is widely used in universities. His second book, Cosmos and Psyche: Intimations of a New World View, received the Book of the Year Prize from the Scientific and Medical Network and is the basis for the upcoming documentary film, Changing of the Gods. He is a past president of the International Transpersonal Association and served for many years on the Board of Governors for the C.G. Jung Institute of San Francisco.